Welcome to STYLE Canada‘s Boreal Book Club: a monthly meeting narrated by Erin Catto, (reviewer at Girl Well Read), for bookworms who’re looking to scour new pages. Since we aim to shine a spotlight on all things Canadian in life and style, beauty, and health and wellness, it goes without saying that every installment of the Boreal Book Club will feature a Canadian author and their latest title. Be sure to use the hashtag #borealbookclub to share with us on social!

On a subway platform in Chicago, Morgan Kincaid’s life is changed forever when a stranger hands her a baby, then jumps in front of an oncoming train. Morgan can’t understand why someone would give their child to a complete stranger and take their own life.

Unfortunately, Morgan’s involvement runs deeper when she’s considered a suspect in the death of the woman, despite the fact that she’s never seen her before. With no witnesses to corroborate her version of events, things aren’t looking good.

To clear her name, Morgan tries to piece together Nicole Markham’s final days. Maybe she and her new baby were in danger? Or maybe she was a new mother struggling with postpartum depression and paranoia? And what is Morgan’s connection to all of this? As she gets closer to the truth, one thing becomes apparent: her life is also in danger.

In her explosive debut novel, Woman on the Edge, author Samantha M. Bailey deftly alternates between Morgan’s and Nicole’s stories, past and present. One of the women is struggling with grief and the desire to become a mother, and the other is struggling with becoming a mother and the overwhelming desire to protect her child.

Nicole’s anxiety is compounded by the guilt of a traumatic event in her past. Her angst is palpable, as are her fears of motherhood, and she becomes a shell of her former self—a far cry from the successful CEO of her own company.

Morgan’s life fell apart when her husband committed suicide after being found guilty of embezzlement. She was burdened with the repercussions, including the police thinking that she was his accomplice. The two women are forever joined by tragedy, but what is their connection?

Cleverly delivered in short, suspenseful chapters, readers will grapple not only with who to believe, but also with not being able to put the book down. With the speed of a train, this incredible debut comes careening down the tracks. It is exhilarating, tense, and consuming.

Pick up your own copy of Woman on the Edge or keep reading to learn more about Samantha M. Bailey in an inclusive interview with STYLE Canada.

SC: Where did you come up with the concept for this explosive thriller?

SMB: Six years ago, I was waiting on a Toronto subway platform when I noticed a woman holding a newborn, standing too close to the edge. She looked frazzled and exhausted, as most new mothers do. As I did, with my own two children. Like a lightning bolt, the premise for Woman on the Edge came to me. As the train roared into the station, I scribbled it down on an empty gum pack I found in my messy purse. When I got home, I immediately started writing it.

SC: This book takes a deep dive into other issues like mental health, misplaced guilt, and motherhood. Why was it important to include these elements in the story?

SMB: I always wanted to focus on mental health, especially postpartum. When I started writing it, there was so little fiction about postpartum depression and anxiety. I didn’t experience depression myself, but I watched so many friends struggle through it, who generously shared their stories so I could access Nicole’s thoughts and feelings. These friends felt so much shame, guilt, and loneliness and were so scared to tell anyone the extent of how they were feeling because they feared judgment. It was only after they’d gotten help that they realized how many women go through it. I did, however, have my own anxieties and worries with my first baby. So, I knew it was a story I needed to tell. I wanted to portray how easy it is for even the strongest, most accomplished of women to suffer dramatic and drastic changes after the birth of their child. How hard it is to ask for help. And how difficult motherhood is.

SC: The main character, Morgan Kinkaid, becomes a suspect in a woman’s death. Tell us about the research you did to be able to accurately describe the process that law enforcement goes through to solve such a crime?

SMB: So many experts were willing to talk to me and I’m grateful. I spoke with a Chicago-based homicide detective, a private investigator, and criminal defence attorney. I’m also lucky to have a friend who is a detective and constable with the Toronto Police, who offered to help with any questions I might have. He invited me down to the station and I spent a day as a suspect. He led me through Sally Port to fingerprinting and the evidence room. I was giddy with excitement because, of course, I wasn’t under arrest, and it all felt so intriguing. When he asked if I wanted to be locked in a holding cell to see what it’s like, I jumped at the chance. He told me to bang on the door when I’d had enough, and it clanged shut. I was alone in a tiny cell – white-washed brick walls, a stainless-steel sink and toilet, and a small bed. I’m claustrophobic and immediately panicked. It took all of thirty seconds to bang on the door and beg to be let out.

SC: Are you a pantser or plotter?

SMB: I’m a former pantser-turned-plotter. Woman on the Edge is the fifth book I’ve written, and the first to be traditionally published. I used to write with a general outline in mind, but that’s completely changed. For this book, I needed a clear map of the beginning, middle, and end so I knew what the characters’ arcs would be, the narrative structure, placement of the clues, the goals, motivations, and so on. I used three craft books to help me: On Writing by Stephen King, Story Genius by Lisa Cron, and Save the Cat! Writes a Novel: The Last Book on Novel Writing You’ll Ever Need by Jessica Brody. I write out a scene-by-scene outline before I begin drafting. For me, it’s a process that works, but every author has their own method.

SC: How many hours a day do you write? What does your process look like?

SMB: Right now, it looks a bit manic because I’m promoting Woman on the Edge at the same time I’m working on my next novel. I usually get up at five or six in the morning, and for a former night owl, it’s a shocking change. I don’t have enough time during the day to really focus on writing, and I actually love the dark silence in my house when it’s just me and my words. I write until my kids get up for school around 7:30 a.m., then I’m all mom – making breakfast, packing lunches, finding homework. The minute they’re out the door, I turn to my emails, social media, promotion, then back to writing until the kids come home around 4:00 p.m. It’s hectic and all I ever wanted at the same time.

SC: What was the hardest scene to write?

SMB: The opening scene, because I wanted it to be as powerful, raw, and visceral as possible. I must’ve revised it at least twenty times, so I hope I accomplished what I set out to.

SC: If you could tell yourself something about writing and becoming an author when you were starting out, what would it be?

SC: What are you working on now?

SMB: I’m working on another thriller that’s also dark and twisty, featuring women and mothers in a very different way than in Woman on the Edge. 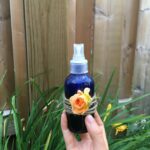