Toronto Fashion: The Store on Queen 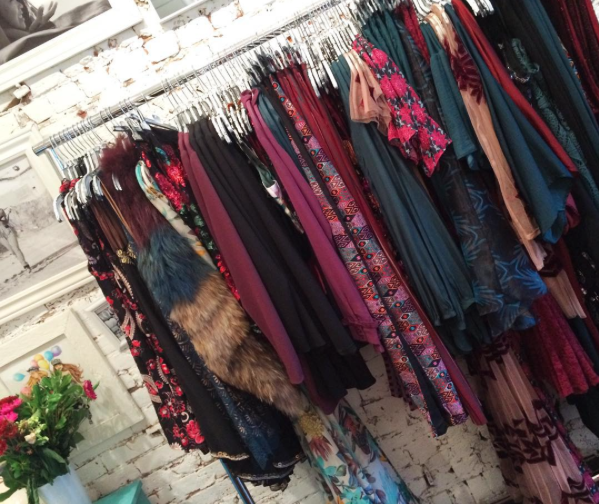 You’ve heard their names (and possibly their laughs), you’ve seen their Instagram posts, you may have even dropped in at their Queen West store; but do you really know Angela and Vava? A rare sit down with Hubby (the man of the house) gives us a closer look into the lives of these body loving, fashion forward Toronto powerhouses.

“Look for the cage door adorned with faux flowers” my girlfriend advised me, “you can’t miss it”. She was right, I did not. Stepping onto the green grass and into the store for the first time I didn’t quite know where to look. There were clothes, beautiful clothes, but they are not what initially captured my attention. Ornate framed photographs hung on the wall space. There was a flamingo, decorative bull horns, a barbie doll dream catcher and oversized shag rugs. I was visually overstimulated, but I kind of loved it. It was the eclectic bedroom that I always wanted, but knew I could never really have. There were layers to it, like a great novel or decadent dessert. You could tell that every inch of the small space had been well thought out, planned, cared for and utilized. If this was their store, who were Angela and Vava? My curiosity instantly intensified. I wanted to know more.

Their story isn’t one that you would expect. They weren’t best friends, co-workers, colleagues or even acquaintances. They were two girls in their twenties, both new to the city and essentially strangers; but through a shared love for fashion, they came together, took a chance on a business venture, and a bigger one on each other and The Store On Queen (TSOQ) was born.

A self proclaimed minimalist, favouring clean lines, body con dresses, tailored blazers and a black and white palette, Angela prefers simplicity when it comes to fashion. If she is making a statement, its with one piece as the focus. For Vava, more is generally always more.  Sequins, embroidery, feathers, fringe, fur, and glitter are likely all staples in her daily ensemble. The girliest of girls, she needs no special occasion to shine.

When it came time to shooting the visuals for the opening campaign, the idea of an engagement shoot theme was proposed. Instinctively, it made complete sense. It was a shot gun wedding.  They had met and within months were contractually, physically and emotionally bound to one another. Personality traits and styles easily dictated the roles and from this point on, Angela and Vava, were now known as Hubby and Wifey.

Having come from different backgrounds, with separate skill sets and strengths, each girl took on a different role and responsibility within the operations of the store.  Having previously owned a boutique out west, Wifey tends to the majority of buying for the store, while Hubby uses her marketing experience to focus on advertising and public relations.  A match made in heaven, the girls rarely conflict when it comes to friendship or business. “I sound like such a liar when I say this, but we genuinely respect one another and we never fight. If something comes up, we will certainly challenge one another, but like any partnership its important to try and understand where the other person is coming from. Its not easy for me to trust people, but I trust Va, and I really value her opinion”.

In a world where (almost) everything is a click away, the importance of having a strong social media presence has never been greater. Posting often, sharing daily fashion inspirations and their stores current merchandise, TSOQ has a loyal and growing following on both Facebook and Instagram.  You’ve seen it or you haven’t. You would remember. Neither girl afraid to show a little (or a lot) of skin.  The feed showcases both owners modelling TSOQ looks in the streets, alleys and door stoops near their Queen Street West location. While the images may keep you scrolling, it is the captions and stories that delve deeper, that draw you in and make you feel like you know them.

Body issues, breakups, deaths, love and friendships are only a handful of the types of personal stories the girls share with their followers.  When asked why it was important for them to share their lives for the world to see, Angela firmly stated that, “Just because we are living our dream doesn’t mean we are immune hardships and the struggles real life. We don’t live in a bubble. We want girls of all ages to not only know that, but to see it. If this is what they want to do, its attainable, no matter what is going on in their lives”.  Everyone has something that can hold them back. The key is in seeing the bigger picture, the potential in yourself and not letting it.

Strong advocates of ‘body love’, Angela and Vava both stress health over vanity.  Angela spoke candidly about growing up and struggling with body issues.  Being overweight, and nearing obesity as a child and young teenager, Angela decided to make a lifestyle change at the age of sixteen. She wasn’t overly unhappy with her body, but the challenge of getting healthier intrigued her and motivated her to start running and clean up her diet. Over time, her small changes began to make a big difference and the weight started to come off. To this date, she still stays away from foods that don’t agree with her body and exercise will always be a part of her daily routine. “[You need to] Understand what your body needs. I don’t restrict myself or limit sweets and dessert. Its about balance and being happy in the skin you’re in, no matter what size you are”.  Part of Angela’s balanced lifestyle also includes taking time for herself everyday.  Squeezing it in isn’t always easy but at this point in her life it is almost non negotiable.  A self proclaimed opportunist, Angela has knowingly spread herself too thin in the past, making it hard to focus and causing herself unnecessary stress. Morning meditation and alone time, away from social media and distractions assist in decluttering her mind and “slows her down”.

During our conversation, the kids (TSOQ staffers) were around us, busy receiving merchandise and prepping it for the floor. It is very evident that both Angela and Vava know what they like and what sells in their store, but unlike many independent boutiques, the girls seek out advice from their customers (and followers) and use that feedback for buying decisions. Recently, silk kimonos were featured on their Instagram account and similar to many highly covetable pieces, they sold out within the day. Knowing the item was high in demand, the girls quickly placed another order and had it available again before anyone could be sad that they missed out on it the first time.  If that isn’t customer service, I’m not quite sure what is.

With Spring around the corner the store is fully stocked with bold prints, ruffles, pastels, embroidered boho dresses, bikinis, crop tops and denim.  You can shop it online (www.thestoreonqueen.com), but a few unique items are only available in store, among those are new temporary tattoos and hand made chokers by Vava.  It’s not always possible, but having a role in the design process is important to both girls and if time allows, neither will pass up a chance to make something for their store and dedicated customers. As we were finishing the interview and I was packing up my bag, I was surprised at how little the last hour felt like an interview and how much it felt like a coffee meeting with an old friend. Maybe its because I had done some research, or because I too follow them on Instagram, but Angela was exactly who I thought she would be. She was refreshing and real. She was beautiful and she was flawed. She was ambitious but at the same time so grounded. She was a woman in her thirties, living out her dream, with her best friend by her side. We said our goodbyes and she gave me a hug.  As I was walking out of the door I couldn’t help but smile and feel slightly more empowered.

If you need a dose of it, girl power is alive, well and perfectly situated at 662 Queen St West.

Coffee or Tea? Coffee
Sugar or salt? Sugar
Favourite places in Toronto: Walking on the lakeshore, strolling through Kensington market and driving into the city.  I never get sick of that view or the feeling that it gives me
Morning bird or night owl? Night owl
Snapchat or Instagram? Instagram
Beauty Must Have: Mascara. I’m a mascara fiend. I will literally put on 20 coats. I’m obsessed. Oh and highlighter. I think its a tie.
In my purse you would always find: an abundance of loose change, receipts and one random chapstick
Best Life Lesson: Always follow your gut
What Are Your Hopes for TSOQ? Oh, world domination (laugh, but serious)
I Cannot Live Without? Oh, so easy. Wifey 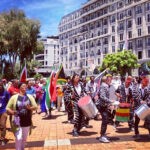 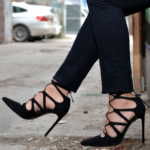 Next: Laces for Days